Michael Williams: All the Best

As Michael Williams comes to the end of his tenure as director of the Wheeler Centre, he reflects on some of his favourite events and memories.

Well, this is certainly a thing.

One of the greatest pleasures of working at the Wheeler Centre for nearly 11 years, and throughout its ten years of public programming, has been the process of bringing people together in a room for the singular experience of sharing a live event with strangers and friends alike. So – as if it wasn't a melancholy exercise thinking nostalgically back over favourites from the decade already, doing so at a time when social distancing means that we can't gather in a room for the foreseeable future seems doubly so.

But ideas are tenacious. Words are indelible. Conversation endures. I'm naming four highlights based on intensely personal measures – but the Wheeler Centre website has literally thousands of hours of rich, thought-provoking chat that I'll be wallowing in over the solitary months ahead.

Our Gala Nights of Storytelling and Shows of the Year

It seems wild to think that we've been around long enough to have created traditions, but these two events – that have bookended so many of the years of the Wheeler Centre – epitomise how we've been able to harness the astonishing storytelling of our writers and our community in surprising and unexpected ways.

Our first Gala, in February of 2010, set the tone for smart, passionate and entertaining approaches to familiar voices in unfamiliar ways, and over many iterations it continues to navigate the space between grand and intimate, heartbreaking and frivolous.

This one's the vanity pick, so apologies, but the fact that this job has allowed me to interview writers whose work I've revered is such a phenomenal privilege. That I could sit and talk with them, hear Simon reflect on The Wire or prompt Dodd to do her best Scarface Claw voice is still astonishing to me. Each time I got to sit on the Wheeler Centre's stage and have these conversations be my actual job was a dream. With Annie Proulx and Michael Williams With Terry Pratchett and Michael Williams 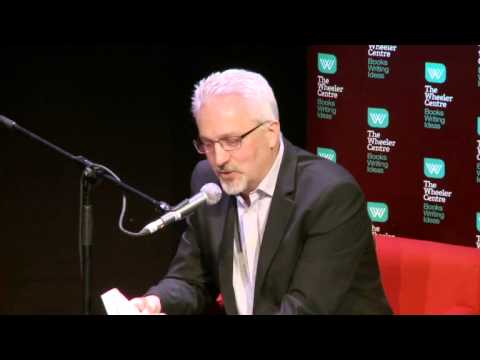 With Alan Hollinghurst and Michael Williams

I was going to name all of Broadside as one of my four, and this one seems a bit unfair to single out as it's not available as a recording online … but it's my list, so bad luck.

When we were created, one of the bits of shorthand for the Wheeler Centre's public programme was that it would be like a year-round writers' festival. This is a terrifying and unhelpful concept: our wonderful festivals (writers' and otherwise) are wonderful because they're short, concentrated events that represent an intensity of shared experience that is quite different to what accessible ongoing public programming can do.

But last year, with Broadside, we took the things we'd learned over ten years (and a couple of other bits of festival programming in The Interrobang, 2015, and the Festival of Questions, 2017) to create a festival of feminist ideas that was one of the best bits of public programming I've ever attended.

This Saturday panel, on decolonising feminism, was so smart and thoughtful and genuinely inclusive as a conversation – and it blew my mind that a couple of thousand people came out for what was a hard conversation on a tricky topic, and approached it with generosity and engagement and care. Professor Aileen Moreton-Robinson was the stand-out speaker on the panel, and watching the respect and authority given to her by other panelists – in what was her first public event for her groundbreaking Talking Up to the White Woman, published 20 years earlier – was moving and powerful.

After the Gala, our first event was four debut writers reading from their work on a Monday evening in an event we called Debut Mondays. (Not every series name was inspired.) To this day, as The Next Big Thing, the Wheeler Centre has remained a place where new writers can connect with an audience, sometimes for the first time.

These events are always energising and inspiring and a valuable reminder that the Wheeler Centre is a place that strives to create a space for people to make the difficult and risky choice to devote themselves to their art. Through these events – and through initiatives I'm super proud of, like the Hot Desk Fellowships or The Next Chapter – we live up to that, and it gives me such confidence and excitement about what's going to come next. What was originally called the Centre for Books, Writing and Ideas – before Tony and Maureen Wheeler generously underpinned our ambition with fundamental support – has more than lived up to its promise and it has done so because of the brilliant creative people we've hosted on our stages. Their books and their writing and their ideas are going to keep this community together: through social distancing and isolation and challenging weeks and months ahead.

And when we can all go outside and be a community together again, face to face, the Wheeler Centre will be there to continue connecting these amazing artists, writers and thinkers with all of us. How lucky we are.

Michael Williams concludes his work at the Wheeler Centre on 31 March 2020.