Malcolm Turnbull: ‘we have to put a price on carbon'

At the close of a significant and dramatic day in Australian politics, we're bringing you a 2010 speech presented by Prime Minister-designate Malcolm Turnbull.

Speaking at the Alfred Deakin lecture series presented by the Wheeler Centre, Turnbull criticised what he said was Kevin Rudd's lack of leadership on climate policy, and insisted that a price on carbon was 'a fact of life'. How have Turnbull's views changed, and how will they play out in power?

A transcript follows. You can watch a video here.

We live in a continent that is uniquely challenged by climate change. We live in a dry continent that is becoming drier, and hotter, in the Southern part where most of the population lives – and we have witnessed that. We have seen the last decade, the hottest decade on record; the next hottest was the one before that, the next hottest, the one before that. Climate change is real, it is affecting us now, and it is having a particularly severe impact on Australia. And yet, right now, we have every resource available to us to meet the challenge of climate change except for one: and that is leadership.

Our efforts to deal with climate change have been betrayed by a lack of leadership, a political cowardice the like of which I have never seen in my lifetime before. The abandonment of the Emissions Trading Scheme by the Prime Minister [Kevin Rudd] surely must be one of the most remarkable political acts, self-destructive political acts, I might say – there is some justice – that we've ever seen. Here was a man who came to office with a policy that he said was the answer to the greatest moral challenge of our times. Ultimately, he could not secure the support of the Senate.

Climate change is real, it is affecting us now, and it is having a particularly severe impact on Australia.

There was a change of leadership in the Opposition; I remember it well. But Oppositions can never be relied upon to support the government; that's why they're called the Opposition. But he had the ability – and has the ability – to take the matter to a double dissolution. He has a constitutional means to resolve that deadlock, but because he did not want to take it on – because he did not have the guts to take on this issue – he squibbed it, and abandoned it, and he wonders now why people ask: what do you stand for, Kevin?

What do you stand for, Kevin? What do you believe in? If you do not believe in action on climate change, what is the substance, the political substance, of your leadership? And the answer is, there is nothing there. We are in the absurd position of having a national government which has set an unconditional cut – target – of five percent from 2000 levels by 2020 – but does not have the means to achieve it. 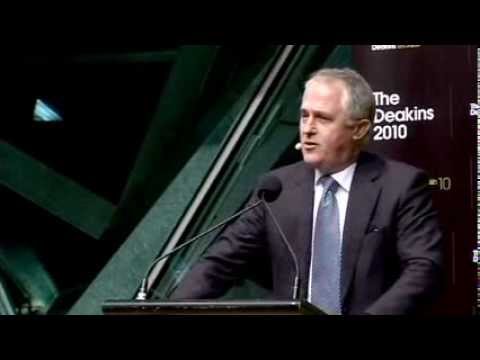 It does not have the means to achieve it because it has cast those means away, and the surreal political aspect of this is that Kevin Rudd chose, out of cowardice – funk, as Tim Flannery described it – not to take on the Emissions Trading Scheme for fear of being accused of imposing a 'great big new tax', not withstanding that the Emissions Trading Scheme had, on the basis of the latest Nielsen poll, the support of 58% of the population; had the support of the vast majority of industry; was well understood and had been consulted extensively with green papers, white papers, studies, amendments and negotiations; it was a well understood instrument for reducing greenhouse gas emissions and one which we knew would work. He squibbed that challenge, and instead, has gone off to pick a fight with his mining tax, which nobody understands, which nobody was consulted about and which now has produced the most extraordinary political backlash we've seen in many years. It's an incredible, surreal episode of political–combination of political cowardice and political incompetence.

Now, the fact is – the inconvenient, for some people melancholy fact of life, is this – we cannot cost-effectively achieve a substantial cut in emissions without putting a price on carbon. We have to put a price on carbon. We can do it via a carbon tax if you like; the better approach is via a cap-and-trade emissions trading scheme. I think most people who write about this in Australia agree on that. But you cannot get away from the fact that there is a cost.

Now, the Coalition's new policy – unlike the Government, which has no policy; it has a policy vacuum, the greatest policy vacuum to meet the greatest moral challenge – the Coalition has a new policy which amounts to the Government (that's to say you, the taxpayers) paying for sufficient abatement in the form of offsets to meet the five percent target by 2020. I have to say, while it is not a policy I would propose or that I would regard as ideal, it does potentially or theoretically have the ability to meet the five percent target. It is a medium-term, stop gap policy; that's probably the best way to describe it. What it doesn't do, of course, is set a long-term carbon price. It doesn't give the investors – people like Grant King from Origin, who spoke here earlier in the week – it doesn't give the investors and the business community the confidence, the signal that they need, to know what kind of investment, what sort of equipment to buy, what sort of fuel to have to generate electricity in the years ahead. So the Coalition's policy, which I say is better than nothing (which is what the Government has) is a medium-term stop gap that hopefully will be succeeded by a thorough-going price on carbon.

If I could just conclude on one point: the proposition that the Government has put out – that nothing has been done internationally and that justifies us shelving the Emissions Trading Scheme – is flawed for two reasons. Firstly, the Government has and the Coalition supports, an unconditional five percent cut. And if you make a commitment to that cut, it follows that you must have the means to carry that out. The Government currently does not have the tools to do that; perhaps Mark Dreyfus will tell us what they are, he might be able to produce them.

But the second argument is that not enough has happened internationally. Well, Warwick McKibbin – the member of the Reserve Bank board, and one of the most distinguished climate change economists in the world – has analysed the commitments made under the Copenhagen Accord. And he makes the point that the commitments that have already been made are very substantial. China's per capita emissions, on the basis of what it has committed to the Accord, will be 22% lower; the United States will be 33% lower – this is lower than 'business as usual'. Ours, at a five percent cut, would be 35% lower. So there are substnatial commitments that have been made, and the Europeans have made, as you know, very substantial commitments themselves already. So there is no reason – no political, moral, economic or ethical reason – for this extraordinary abandonment of responsibility by the Government. What we have instead of leadership is cowardice. What we need to become truly a low-emission economy is courage and leadership.